The Island of Misfit Toys…

I was a cultural mutt growing up. My parents joined those who went East in search of spiritual answers for their everyday, material problems. They spent years pontificating on the existence of God and what that being must be like. Where others might have picked up a motto here and there or a teaching every so often to help them along their current life, my parents found so many of the answers that they sought within Indian philosophy that they did an entire lifestyle change.

I grew up with meditation, yoga, Gods, Goddesses of different powers, colors, genders, and personalities. I am among the minority of those in America born and bred a vegetarian. And I still am. I read books about philosophy and spirituality, books on great teachers and truth seekers and for as long as I could remember, I was completely misunderstood at school.

My race is African American. That had been the foundation of history for me. I was taught about it all, in order to be aware of how the world might see me when I “show up”.  Aware of how some might want to limit me. But as for heritage and culture…I was fostered with the intrinsic belief that I am made up of more than the color of my skin. More than just my body. What makes the essence of who I am is my soul. Now, imagine trying to explain this to your classmates when they asked you what you did at home, or what your thanksgiving holiday was like.

My parents wanted the absolute best for me. Instead of sending me to the closest zoned school where we lived, they went out of their way to find the closest and best public school. They succeeded. Tucked away in a part of Queens that housed a predominantly Jewish neighborhood was a large public school that was willing to take me. Although it was a public school, because of the neighborhood, they were very sensitive to the majority of children that attended. So as it turned out, I was an African American girl, raised with Indian spiritual values, who went to school and learned all of the Hannukah songs.

Unfortunately, I was also one of two black kids in the school. The other was a disabled girl named Mousy. Prejudice almost seemed like it was a natural thing for these children who never even felt ashamed to blatantly tell me, as early as five and six years old, that their parents had warned them not to speak to me, not to engage me and most of all, not to touch me…because the color of my skin might rub off on them and that was an ugliness that they didn’t want to have to deal with.

So everyday, I would go home holding my head up until I got there. And once in the safety of my room, I would cry to my beautiful Krishna, one of the most popular images of Divinity within Indian Spirituality whose own skin color is often described to be as dark as a monsoon raincloud. Who is praised for his “blackish”beauty. And I would take comfort in maybe knowing that even God might understand how it felt to be different. 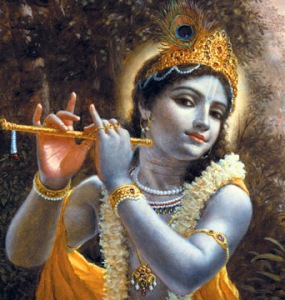 I am a survivor of bullying, of racism and prejudice, of physical and mental abuse, of depression. But I am a survivor. And one of the best things I’ve learned about surviving, is that is makes the best foundation to nurture a heart of compassion. It’s not just me who has survived. We all have. Anyone who has ever faced any kind of diversity. Anyone who has stood up to an outside world that threatened to crush their spirit, stomped their foot and responded with a resounding NO. Anyone who refused to lay down and die. We are all survivors. We are the best nurturers. We can become the most grateful and the most compassionate. We become the army that makes the change.

I heard from a spiritual teacher once that only a heart filled with gratitude and compassion can cultivate a true atmosphere of love. Not only for themselves but for everyone around them. I learned that revolutions don’t come from the status quo. They don’t come from those who are popular. The mainstream. They start with the misfits. From the ground-up.

So if I had a dream reader….it would be you. The ones who feel what no one else feels. The ones who love the way others do not. The ones who understand and comprehend within their spirits the philosophy that others scoff at as hokey or “weird”. Yes! Give me the weird ones, the strange ones, the quirky ones, the artists, the innovators, the misunderstood geniuses. Even those who sit in their rooms with tears in their eyes, their souls trembling and unaware of their potential, lamenting because they simply do no “fit in”. Give me an island of misfits. They are the ones with the most heart.

“It is dangerous to become normal in this day and age. Become extraordinary. This path of devotion to God through love, through song, is for extraordinary people.” Sacinandana Swami

I'm a 30-something year old living in my native New York...I adore the city, writing, books, tea, music, long walks and rainbows :) Aaaand What happens to a dream deferred? In my opinion it gets sucked up dry and spat out as a gnarled petrified mass of what the heart used to be...so I'm also coming out as a writer who wrestles with questions of identity, reality, race and even sexuality. I'm having fun finally writing my own story. Feel free to help :)
View all posts by Avery Rose →